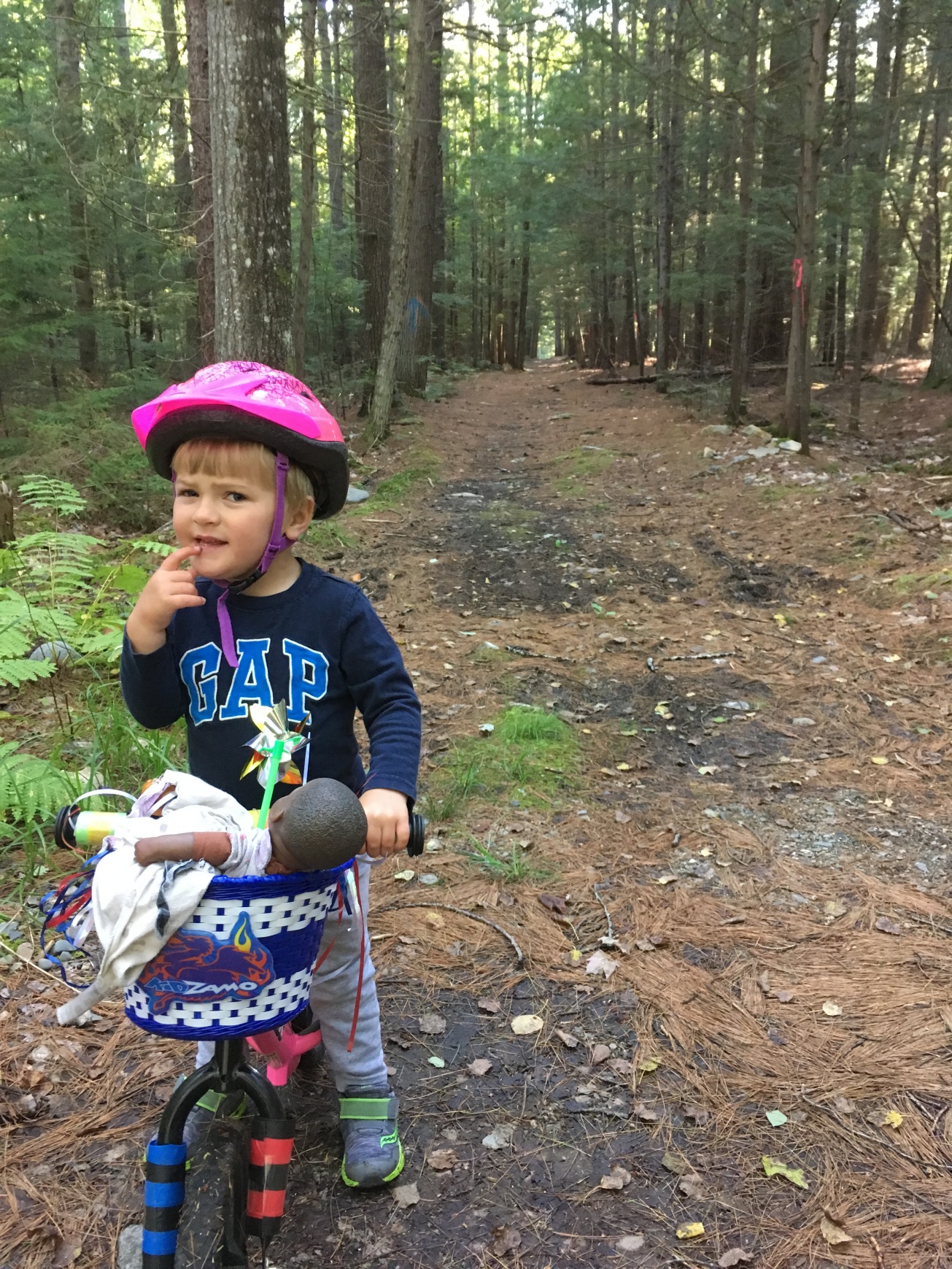 One of life’s big existential mysteries grabs up a 3-year-old, his middle-aged grandmother and a random old guy walking by.

We drove up under the canopy of the retirement community, opened the trunk and the passenger side door and grabbed the first load of birthday party cargo and cake. As we head for the big double doors, an old man in a walker is just starting out but then kindly stands aside to let us pass. We dump our stuff in the Garden Room and three minutes later we’re back for the next load.

Gary gets to the car first but immediately turns back to me.

“Where are the balloons?” he asks.

I look at him.

“What do you mean, where are the balloons?” I say, feeling a surge of something. “Aren’t they in the car?”

“Did you do something with them?” I ask, knowing full well he hadn’t, having walked every step of the way down the hall with me. Still, my mind is frantically trying to make this all work out.

“No,” he says, confirming the obvious.

“Well, where are they then?” I kind of shriek, seized by a strange amount of emotion for a $10 bunch of Dollar Store balloons.

I can’t believe it. We both look again in the car, like maybe they are just tucked away somewhere, which makes no sense on any level given their mass and how hard it had been to stuff them in my little Mazda in the first place. They had not wanted to get in there. We finally get our heads out of the car and look up at the canopy ceiling. Nothing. Then we walk out from under the canopy and look up into a big, empty blue sky.

“Do you think that old guy took them?” I ask. He’s been hovering at the edge of my mind since the first mention of the missing balloons. “I mean, it doesn’t make any sense, otherwise. Those balloons were wedged in the car. They wouldn’t go anywhere on their own.”

I look down the sidewalk with a growing suspicion that I will see a figure in the distance, shuffling along with 10 red heart balloons tethered to his walker. Not a soul in sight. Could a guy in a walker make it in 3 minutes to the tree cover where the sidewalk bends, I wonder? It’s a good block’s worth of walking down the long driveway. I decide it’s possible.

“I  think it’s him because otherwise the physics just don’t add up,” I say to Gary, like I know anything about physics. “I mean, what would get those balloons moving out of the car? It’s not like it’s windy. We were going to have to wrestle them out as it was!” The more I thought about it, the more convinced I am it has to be the old man.

“I don’t know,” Gary says again. I can see he is actually mystified, which is not like him.

I’m not about to let it go. I head to the front desk, eyeing the security monitors. “Did you see someone out there with balloons?” I ask the woman at the desk. “We had 10 balloons in our car and now they’re gone!”

She looks surprised. “No, I didn’t see anyone,” she says.

“Do you think the security cameras picked anything up?” I feel a desperation to get an answer as if this would get the balloons back. A confusing, grief-like feeling is coming over me.

“I don’t know, I don’t think there’s a good view of the carport,” she says, glancing back at the full sweep of monitors stationed behind her, divided up into about 25 strategic views. I look at her doubtfully. It seems pretty comprehensive to me. And we are talking about the front entrance, a prime place to check for the comings and goings of various concerns.

Is she just saying that because she doesn’t know how to use the technology? I wonder, now freely casting suspicion on anyone in my path.

“They’re meant for my mom,” I say, as if this will change anything. “I just wanted to make her happy.” This is the truth. This is not a happy time of life for my mother. Nevertheless, wherever the balloons are, they are long gone by now whether I accept it or not.

“I’ll see if I can get someone to take a look,” she says kindly.

There’s nothing left to do but say okay and head back out for the next load. We finish getting the room set up for the big 86th birthday celebration as Dad rolls Mom in.  But then, while we’re sitting around the table waiting for Hunter, Rachel and the kids to arrive, Gabe, the facilities guy, walks into the Garden Room grinning.

“The mystery of The Great Balloon Escape has been solved!” he announces. “Come and see. We’ve got it on tape.”

I can’t believe it!

As we walk down the hall it’s clear Gabe doesn’t want to give anything away before the big video reveal, but I can’t hold back.

“Was it the old man?” I blurt out. “I mean, how could the balloons have just come out by themselves otherwise?” I babble on about how we’d had to battle to get them stuffed in the car in the first place, how there was no wind when we arrived and how physics requires some action to set a still body in motion since a body at rest stays at rest or something like that.

Before Gabe has a chance to answer the rest of our party piles in the front entrance.

“Hi! You’re here! All the balloons disappeared out of our car!” I call out, greeting them hysterically. “We’re just about to see what happened to them on the security monitors!”

We all crowd around the desk. I boost 3-year-old Leo up so he can see a monitor angled our way. And then as we stare at the screen with the tension and excitement building, we see one balloon edge over to the open passenger side door, hover for a moment then slip on out. Another quickly bobs into view, pops out, then another and another. They are gaining confidence, but once they are all gathered outside they hang unsurely by the side of the car like they don’t know what to do now. And then all of a sudden they do, like instinct clicked in, and now they are off, passing through the carport before lifting up up up, out of the frame and into the wild blue yonder. Leo is in awe.

Hours later after the party, when we are rolling Mom back down the hall to her room, Leo comes back to the balloons.

“Mimi, I can’t believe the balloons just floated out of the car and floated away,” he says, incredulous.

Then he brings it up again in the parking lot as Gary helps them get loaded into the car.

“I can’t believe those balloons just floated out of the car!” he says to Gary.

“Where do you think they are?” Gary asks.

“I don’t know but they have to be somewhere!” He can’t get over it.

Hunter texts me later that week. All week long Leo has been circling back around to the balloons. “They have to be somewhere,” he keeps saying.

And all week long while this little, 3-year-old boy had been trying to wrap his mind around the first big existential question of his life, I kept returning to how I had been so ready to pin a balloon heist on an old man in a walker, how this had seemed the more likely explanation for what had happened — the only possible one, really. I felt sheepish about my certainty. How in my mind had this seemed so much more likely than reality?

But the more I think about it, the more I love it. I love the idea that I had put my money on the old guy. I love the idea of an old guy ambling off into the great beyond Thelma and Louise style, tethered to a bunch of heart balloons, getting lighter and lighter as he lifts up, up, up. Maybe he’d known Sunday was the day for him to go somewhere.

I love thinking of him up there with the balloons, flying through the sky. 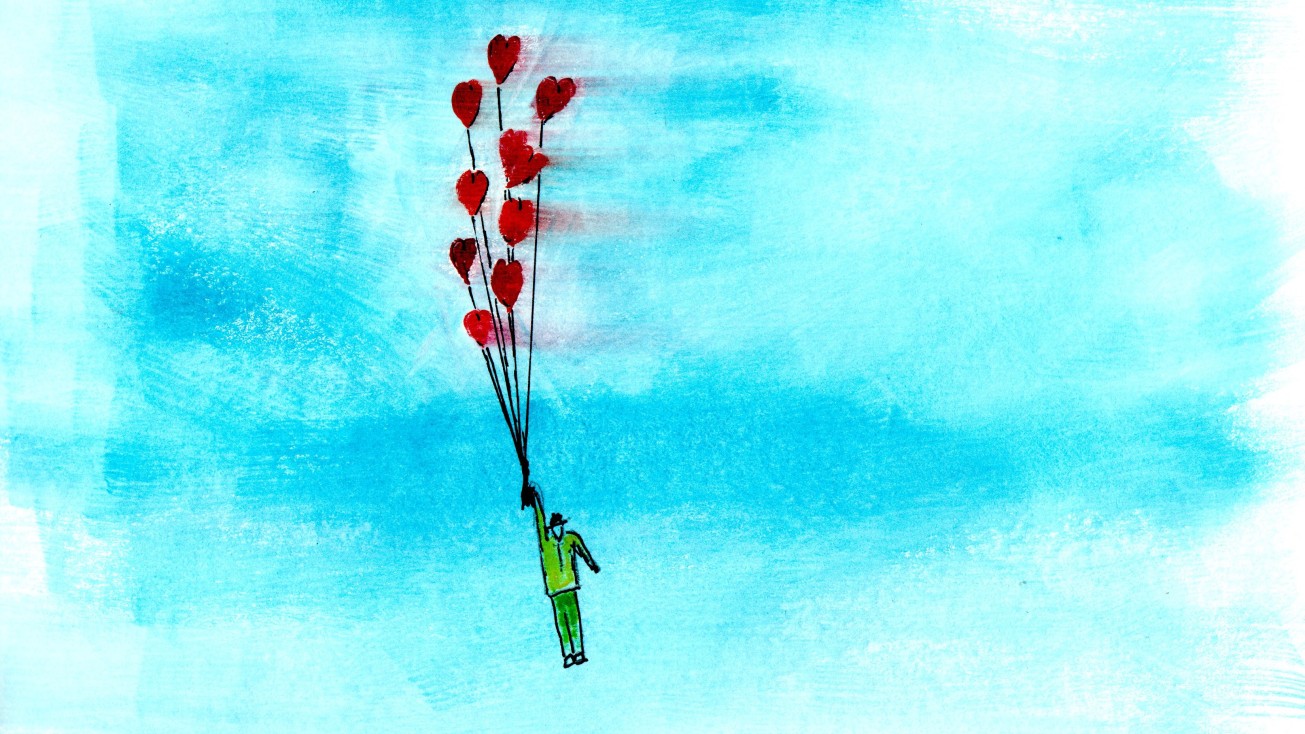 Key
Gary — my partner
Hunter — my son
Rachel — my daughter-in-law
Leo — my grandson
Zoe and Fiona — my silent granddaughters in so far as this story goes, but they were most gloriously present!