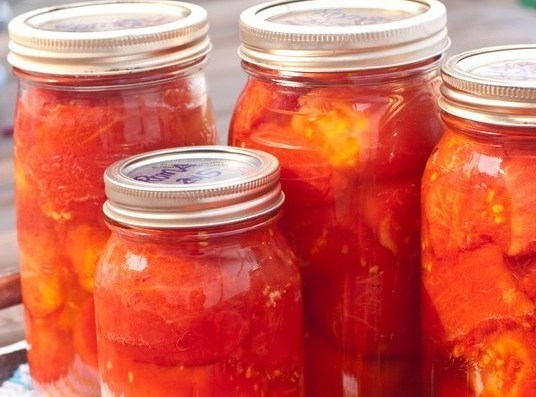 The tomatoes are spread out, four dozen of them, on sheets of newspaper covering the countertop.  A few are disfigured, their sides gangrenous, the pale yellowish-gray, limpish crust turning to fuzz.  But most are symmetrical – either round or pear-shaped – and evenly red.

I sort out the good ones and wash them first.  When I run water into the kettle, it turns orange, full of iron, against the splotched and stained aluminum.  In the covered kettle, on the back burner, the water hisses, rumbles, finally bubbles and rolls noisily, announcing superfluously with steam that it is boiling.  When I lift the lid, my glasses cloud, and I lower a perforated metal basket layered with tomatoes into the boiling water.  I leave them submerged for 30 seconds, then lift the basket out and roll the tomatoes into the sink, under cold running water.  The procedure becomes rhythmic as I repeat it, but never mechanical, for there is always the human voice, counting the seconds or warning a little girl away from the stove.

After all the tomatoes are in the cold water, the messy part begins, with its own rhythm.  Coring, peeling, cutting, pressing, I pack wedges of tomatoes into hot clean jars, periodically wiping the counter, checking to see that the sheets of newspaper strewn underfoot are catching at least some of the juice.  I fill the little pan with hot water for the lids, thin discs with metal on one side, enamel edged by a red rubber ring on the other.  And I fill the largest kettle I own, one almost two feet in diameter, half-full with water and center it on the largest burner.  I set out a sack of canning salt, hardened into a 4-pound block since last year, bottled lemon juice and measuring spoons.  The salt I have to prod and beat into something like granules.  In the steamy kitchen I feel hot, quite naturally, and – quite unaccountably – nervous.  Canning tomatoes is nothing very important or public, but my heart is pounding very fast.

I’m worried by now, wondering if the jars and the boiling water bath will be ready at the same time.  They never have been, not when I’ve been canning.  I measure salt and lemon juice into the jars, spilling a little of each on the counter, then wipe the rims, place the lids, and tighten the metal rings.

I spend 10 minutes wandering around the kitchen, chewing my fingernails, until the water finally boils.  After I put the eight jars into the kittle, I wait for the water to return to boiling, set the timer for 25 minutes, wipe my hands on my jeans.  The chores of cleaning up are next:  disposing of mounds of slippery skins and firm cores, scrubbing kettles, wiping counters.  When the timer buzzes, I turn it off and also switch off the last burner on the stove.  I lift the kettle’s lid, and then the jars, one at a time, setting them in neat rows on the butcher block beside the stove.

My work is finished now, but I find excuses to dart back into the kitchen and look at those jars, so perfectly honest, not hiding their contents, like their supermarket counterparts, behind tin sides and paper labels.  These jars, wiped dry on one of my quick returns to the kitchen, display chunks of tomatoes, transformed now to a dull, rusty red, dotted with golden seeds.  Some of the jars have oozed because I filled them too full.  I wait anxiously for each pop that signals a safely sealed jar and think that my tomatoes are quite beautiful.

I am not so accomplished as my grandmother or my mother, whose handed-down jars and rings I use.  My tomatoes always float a little; theirs were packed solidly from top to bottom.  But I was too busy reading and pondering Great Questions all those summers in Pennsylvania; I missed all the little refinements I would have learned, watching them can tomatoes.

And now I can’t learn those refinements from the USDA booklets that guide me.  They don’t tell, either, why I bother with all the mess, the heat, the time taken from books and children and laundry.  When I push the grocery cart down the first aisle, past cans of spinach and corn and peas, I could stop in front of the tomatoes.  But I choose the work of canning tomatoes myself, perhaps because Grandma canned tomatoes every summer, working of necessity to feed a husband and six children, and because I remember nothing else that links us quite so securely.

We had our differences.  Grandma regarded me with expectant shock, fearing the sure, if slight, deviations from what she knew to be right.  And I, perversely, baited her, with the slightly sharp dismissal, the skirt hemmed just a half inch too short, daring her to be petulant or prudish.  When I was quite young, she had ridiculed me.  I confessed to her that when I grew up, I wanted to have six children, as she had done.  And she, a tall, strong woman, hooted scornfully, “You?  Such a little, fine-boned thing?  You could never do it!”

Am I holding to a fragile bond with the women of our family, their nurturing tradition, or am I saying defiantly, 20 years after her death, “There.  I can do something you didn’t think I could?”

Or perhaps this is not all.  I may can tomatoes this year because the world seems to be falling apart.  This is a summer of more than discontent, of danger and uncertainty.  Times Beach leaches toxicity into babies born and unborn.  The rhetoric of politicians booms with echoes of black B-52s.  As we rode through Wyoming on the train earlier this summer, I imagined specters of MX missiles against the sky.  I can’t stop the silent seeping of poisons or the shrill roar of deadly aircraft, and I wonder if the politicians know how.  Helpless in the face of these dangers, I can tomatoes to remind myself that I can control something.  I know very concretely where my tomatoes come from, if not just how – which seed, which soil, which blossoms.  I know what I intend to do with them, which of my mother’s jars I will fill and which shelves in my basement.  Such a reasonable thing this is, to plant, tend, harvest, process, store, and use – so human, so reassuringly cyclical.  Canning tomatoes this summer takes my time but maintains my sanity, suggests a future when I will open jars, cook with the canned tomatoes and have those jars to use again.

Perhaps, in another 25 years, I will give dozens of my jars to Emily.  She does not seem a likely candidate, this 10-year-old lover of cities, jet planes, and adventure.  But neither did I – reader, dreamer, hater of every domestic task.  And she is my daughter, my mother’s granddaughter, my grandmother’s great-grandchild.  Somewhere, in another 25 years, she may want to can tomatoes.