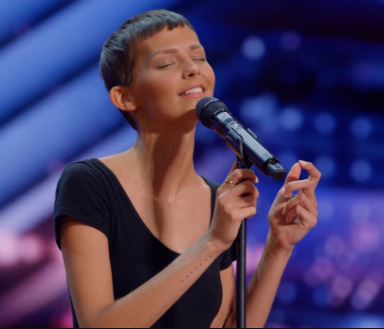 Those are bold pronouncements to make but she gets to make them because she’s 30 years old and has a 2% chance of surviving cancer. But it’s okay she says. And when she sings her original song, It’s Okay, somehow it seems as if it could be so.

If you listen to It’s Okay it might get you. (It got her the Golden Buzzer on America’s Got Talent 2021, which means she advances to the live show later in the year.)  It most certainly got me. But then I started thinking about what my friends who are also going through terrible and life-ending things would have to say about this. It doesn’t feel okay to them. And it’s not okay with me. Maybe it never will be on any level. I don’t know.

What I do know is that when I listened a second and third and fourth time it felt like I was watching someone transcend. Even the way she moved was somehow transcendent, like she might take flight. Like she was lifting us up with her. It felt like peace rising.

* She goes by Nightbirde when she sings, after the birds who come to her window and sing through the dark full of hope though the morning is far away.

To my friend in flight, who passed on Saturday. I know you’re out out there soaring around somewhere.