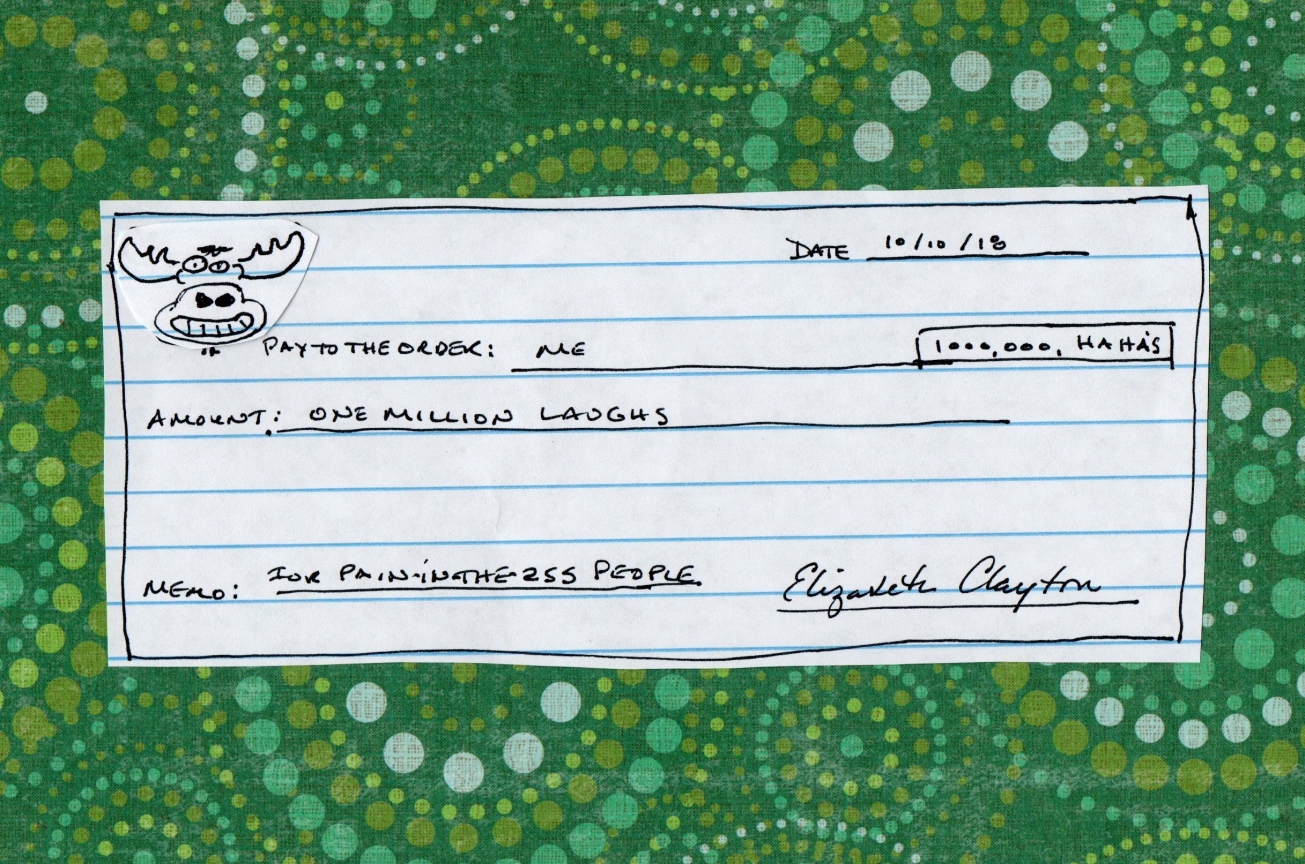 “You look happy.” I had to say it. He was using his big round belly as a table for three Werther’s Originals as he lounged back in the Adirondack chair, looking content to a degree you rarely see.

“I am,” he said, a middle-age poster child for serenity, which was exactly what we were all dying to find here at Kripalu, the yoga and education center in the Berkshires I occasionally zoom 5 hours to get to whenever I can pull it off.

He shrugged. “I pay myself in laughs.”

Ooooh…..this is just the kind of thing that goes straight to my radar, ever on the alert for clues about how to go about the tricky job of living. It turns out he is a corporate lawyer from Boston. They pay big in common currency but very poorly in fun so he has to make up the difference.

Being literal, I took his laughter-as-a-method to heart and back to the laboratory of my mind where I conduct continuous experiments in mental health. But once in Bangor, I very quickly regretted that I hadn’t gotten more specific instruction about how, exactly, paying yourself in laughs works. Is this a regular paycheck or pay-as-you go? And what is it for? Pain-in-the-ass people in your life? Lack of deserved recognition? Bad breaks and hard knocks? Or are these emergency rescue laughs sent out to bring you back from the brink?

And from where exactly do you draw down these funds? It seems very challenging to manufacture them in the bleak and over-burdened moment, so maybe you collect them in a sort of solar panel for laughs, storing the excess on a laugh grid?

I was especially curious about strategically using laughter in this way because funniness has seemed magical and mysterious to me almost from the beginning when I first experienced its force in third grade. My best friend and I were assigned a bunny duet in the spring concert, playing the role of a couple of bunnies singing about hippity hoppiting along, laughing all the way, ha ha ha ha ha ha ha. A problem, however, cropped up with the ha ha’s, which got away from us. The laughing just went on and on and on, two bunnies hippity hoppiting over the edge into lunacy.  Even when we were finally able to bring it under control they’d bust back out, popping up in other songs, not letting anyone forget too long about the couple of unhinged bunnies on the loose.

With a curious, lunatic rabbit theme developing, the public laughing happened again in sixth grade when I was cast as the Mad March Hare in a community theater production of Alice in Wonderland. At least this maniacal laughter was entirely scripted. One thing seemed clear from all this though: there was a great storehouse of wild laughter within me, spontaneous or producable at will, whichever was called for.

And I even became a little famous for that performance, enough to make me wonder what on earth I was in the grip of, so when the major research project for 7th grade rolled around the following year I began my serious investigation into why we laugh and what makes something funny. Alas, beyond collecting a number of comics and jokes and pasting them in a humor notebook I didn’t come to any big conclusion.

But laughing took a serious turn in 2008, the year I came apart. Only comedy was allowed in the house. Gary and I watched episode after episode of The Office, sometimes 5 or 6 a night, straight through years of seasons despite Gary having already seen all of them, save the new ones doled out on that skimpy weekly basis. How he did not scare off is a marvel to me still. And if some stable person innocently recommended a great movie or show that turned out to have a car accident or the sound of sirens or any other hint of tragedy or sadness momentarily passing through the story I would be gripped by a furious outrage at their irresponsibility, as if I were their improperly supervised child allowed to play along the sheer drop-off of a rocky coast.

But Michael Scott in The Office….his total unfiltered ridiculousness, how utterly incapable he was of understanding what is appropriate and what we are allowed to say, instead exposing exactly what was going on in his head, possibly privately mirrored in the absurd heads of some if not all human beings at large, and how perfectly he demonstrated the embarrassing dilemma of being human, how we have to manage the inside and the outside and how this can be such a miscalculation, such a screw up, such a comedy and tragedy of errors. And yet underlying it all with him is a pulsing heart of no real ill intent, just a person gripped by this impulse and yanked by that emotion and totally clueless. And while on occasion he was far from kind and I have a big thing against bullying, what he did for healing my heart makes him count as one of my saviors.

In that year of The Office and the strange proximity of laughing my head off by night and crying my heart out by day, another of the great mysteries of laughter came forward — how close the hysteria of laughing is to the hysteria of crying, how you sometimes can’t tell if someone is laughing or crying and how one can flow right into the other. And while Michael Scott may have been a liability of a manager, he always managed to ensure I made it back around to the laughing side.

Then, in a beautiful stroke of luck, I came across a poem about just that mysterious shift. The person in the poem is inside a house crying and crying, heaving some soul-deep sadness out of himself when it happens — the laughing crosses over and now he is laughing and laughing so hard he has to open the window to let the laughs out because they have filled up his house to overflowing, so he hangs out the window to laugh and can’t help himself but to start shouting out to people on the street how wonderful life is and how this great discovery has just come to him.

So still I wonder: where on earth does laughter come from?

It is such a mystery. And such a beautiful grace, because one thing I do know is when the laughs are gone, so is life.

Note
The stories in this blog are excerpts from my memoir, The Organization Project. While they are true to me and reflect how I see, I acknowledge there are multiple truths, including my own which change over time, even as the events themselves remain the same, whatever they were. What I make of an event 5 years out may not be what I make of it 10 years out or 50 years out. And, of course, those who appear in the story may see it in an entirely different way than I do or did.