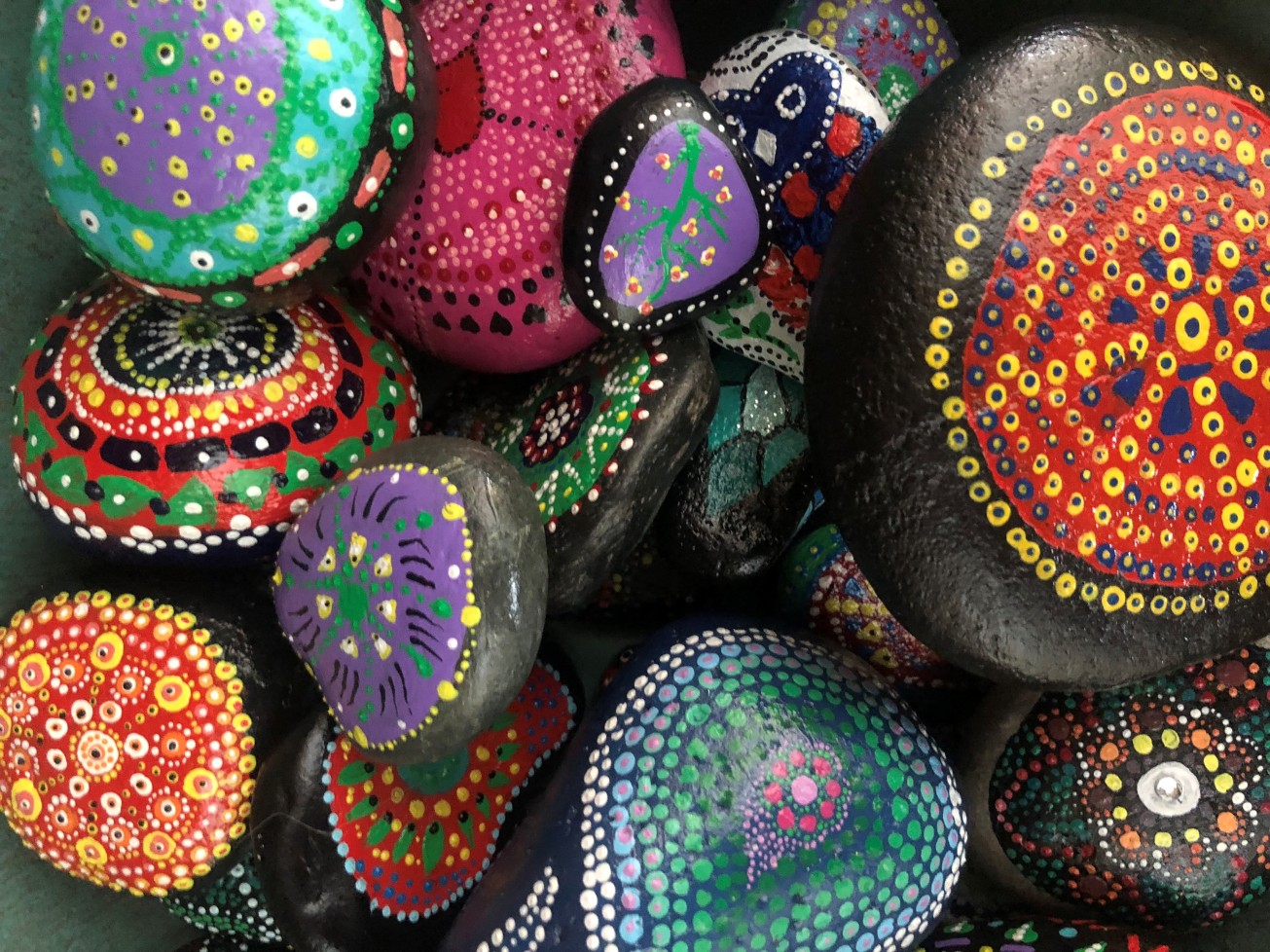 There is a lady who walks her dog on State Street in Portland every day. When she gets to Mercy Hospital, she takes a little detour so she can place a painted rock on the hospital’s front entrance steps or the guardrail going down to the Emergency Department where someone will find it. On one side of the rock she has painted a mandala; on the other side the message, “For you, with love.”

The reason for her near daily pilgrimage of appreciation to the hospital is because her husband had once been a patient at Mercy. He was cared for so compassionately during this difficult stretch of time it softened the hardship in the way only human touch can. She keeps her gratitude alive by leaving something from her heart for Mercy’s compassionate employees.

I know about this lady and her mandala mission because an employee at Mercy told me about her after last week’s story about mandalas. He wasn’t the only one who had something to share with me about mandalas, which makes it seem as if there must be something uniquely captivating about its design – maybe its mesmerizing, uniform beauty? Calming energy? Inclusive accessibility? Whatever the quality, it seems like a perfect vessel to carry this woman’s anonymous message of gratitude. The person who finds the rock won’t know the story behind the love, but maybe will feel it anyway in the mysterious way symbols can carry something of us.

It’s so funny that a month ago I didn’t even know what a mandala was, but mandalas are apparently where it’s at based on the number of people who let me know about their  mandala experiences and plans. Not just plans for individual projects, but also to do together as a group or department team-building activity. Of course, I thought this was a brilliant idea so I immediately ran to Jen, the artist of the mandala that set the whole Wellness Wednesday Mandala Madness in motion, to spread the news about this creative spin-off of her work. She also saw the brilliance.

But not 10 minutes later I heard from someone who had tried doing a doodle-based project with his team which had gone south because everyone was too worried about laying down the mark that would ruin the whole project. This person stressed how he’d reassured them repeatedly that there was no wrong mark but they were paralyzed. Finally, the most artistic of the bunch just did the whole thing.

In a panic, I immediately ran back to Jen to get some advice on how to save these team-building mandala projects I’d been loudly encouraging to those who’d written me. Calm in the face of this disaster, Jen simply noted that even though the group in question had been reassured there was no wrong move and therefore no risk, having the very well-defined structure a mandala imposes goes a long way in putting people at ease.

Still, reassurance plays a critical role where there is public creative risk, so Jen immediately crafted some additional instruction for those interested in making a group project out of it:

“The mandala’s readymade framework takes a lot of the creative risk away. The beauty of mandalas is the repetition and balance. Even a “weird” mark looks right once it’s been deliberately repeated in a symmetric pattern as part of a greater whole. It just has to be stressed there is no messing up. Whatever you do is the right thing; whatever comes out is what it is it’s what’s supposed to be there.”

To me this is as good as saying we are supposed to be here contributing our marks, some of them kind of weird, all of them adding to the larger creation in some way.

Thinking about being comfortable about making our mark immediately reminded me of the mandala my 5-year-old granddaughter, Zoe, made at my house the other night. She came in the house, walked into the kitchen, saw the mandala Jen painted on my kitchen floor, announced she was going to do one and got right to work. I had an idea Zoe might be thus inspired so I was ready for her, having copied off Jen’s mandala making instructions.

However, if you’re like me*, maybe the next thing you noticed was the big smudge on the left where Zoe had tried to erase the star which somehow got in there instead of the triangle that was supposed to follow. Not only did I notice this “imperfection,” but I briefly wondered if we might be able to patch it up with some white-out so we could get it right.

But Zoe was clearly bothered not one whit by this smudge when she presented me with her mandala because she immediately followed up her gift of artwork with an enthusiastic offer to help me paint the other floors in my house. She was excited to bring her contributions to the team. When were we going to do it? Which room? She was ready.

I want to report I’d instantly started to plan a floor-painting date with Zoe, but, in truth, my response was more like a panicky, noncommittal stammer. But even as I fumbled for words, there was something about her unconditional happy offer to make her mark on the world that got me.

*I heard back from many employees who immediately let me know that they hadn’t noticed the smudge at all, confirming that I am a bit awful.

Cover art credit
The stunning collection of mandala rocks featured in this story were made by my longtime friend, Christine King. I didn’t even know she painted mandalas! But she’s always up to something, and painting mandalas was what she was up to last summer.

Note
This story originally appeared in Wellness Wednesday, a component of the employee wellness program I run for a health system in Maine.